Various ways to bypass referer check in the same origin:

Use history.pushState to bypass referer check. It seems that specifiying referer in fetch() can also works. The flag SaF{service_workers_are_useless_they_say} indicates that the intended solution is about service worker, but I didn't use that.

Here are some tricks which can help you reduce the number of frames:

1. Beat the RNG of RndSpike

Take a look of Rnd.py. it tells you that LCG influenced by the keypresses. So I wrote a simulator to predict the movements of spike.

According to Player.py. you can crouch immediately after you punch to reset the attack timer. By repeating punch and crouch, you can deal one damage per two frames. This trick helps you quickly kill TRex

By using these two tricks, I got the first two flags

3. Write a script to produce moveset

Human makes mistakes, so I wrote a script to produce the moveset. A mistake-free moveset saves lots of frame.

Then I got the third flag.

This trick helps me get the fourth flag and the fifth flag.

This is the last trick I found: When you are damaged, you'll be invulnerable in a short period. But only the second orbspike can be skipped by this trick.

That's all. Now we can get all the flags. 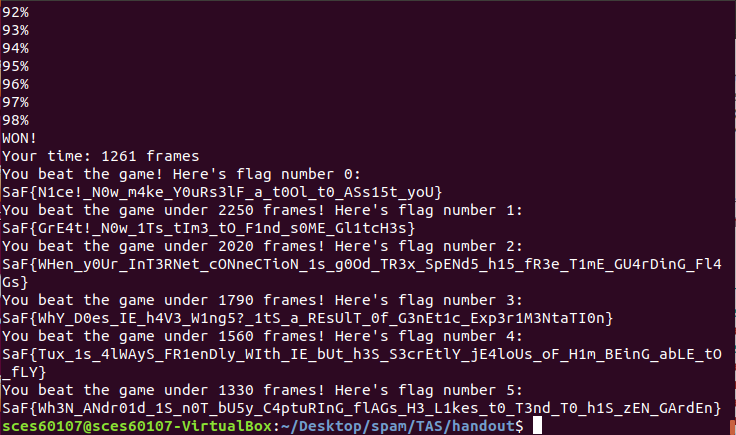 This write-up is for the unpatched version. For the patched version, we didn't find the BASH_FUNC_[function name]%% trick and got no flag in that challenge.

After you saw the releasing of the patched version, check what's the patch:

This is the only line being modified in the shell code (there are some unimportant changes in other files though). Clearly, the vulnerability is to put option(s) to grep.

Check the manual for any option that could read a file, we found -f [FILE] would read the patterns from the FILE. After testing, we confirmed that it could be put as -fflag (without whitespace), and we could also use -eFlagFragment. They provide almost same effects and, the most important, we still got room for more short options.

We could put -r since grep searches the working directory if no file operand is given (note that issues.txt is fed by redirection). Now with -reFlagFragment, it works locally without sandbox. But this would timeout in the sandbox and abort the connection immediately for remote (couldn't even get the output from challenge.py).

There are many options to optimize the search. The only useful one I found is -I to ignore all binary files. Now put -rIeFlagFragment as argument and generated 16 arbitrary keys, then you'll get 4 flags!